“Dance can be used to convey messages, bring awareness and spread ideas,” says Kaitlyn Esposito. “It’s so much bigger than movement.”

To read more stories about Fairleigh Dickinson, scroll down:

Teaneck Chamber of Commerce Honors FDU at Community Awards Dinner
On the Clash of News, Politics and Justice with Journalist Jeffrey Toobin

“Watching a dance,” Esposito says, “is like looking at a painting. Nonverbal communication transcends all boundaries.”

“I love how you’re able to express something you relate to on a spiritual or emotional level,” says freshman theater arts major Bradley Berdecia. He joined the troupe to hone his dancing skills and become an entertainment “triple threat,” an actor, singer and dancer. “Sometimes in dancing, there’s nothing being said at all, but you still connect to what the people are dancing about.”

Connections run deep in the group, a safe place for dancers of all levels and backgrounds to master steps, express themselves and find camaraderie. “The studio is too small,” says Esposito with a little laugh. “We have all different majors and grades represented. We celebrate differences at FDP.”

“FDP is very inclusive. There’s no stereotypical ‘dancer type.’ Anyone can do this,” says sophomore Ralphy Williams, a theater arts major.

That was exactly Esposito’s intent — start a serious dance troupe, with a social mission, open to anyone. The response has been overwhelming. FDP has performed at Family Weekend, Relay for Life and the Maddy Awards, which recognize campus excellence.

At Relay, FDP performed a piece about breast cancer. Esposito had met with Jenn Noon, associate director of athletics and head field hockey coach, a breast cancer survivor. “She typed up her story and I recorded it. We danced to her words, no music. Then at the Maddy Awards ceremony, we surprised her with a performance. She started to tear up. Just seeing how we made her feel, that’s why I do what I do,” says Esposito.

The dancers are rehearsing now for an upcoming showcase on Tuesday, Dec. 12 in Dreyfuss Theater.

“I’m the girl who basically lives in the dance studio, stretching, choreographing and improving,” says Esposito. Right now, she’s trying to conceptualize a dance about climate change and sustainability. “Seeing your choreography come to life is really magical. It starts out all in your head. Then you see it and think, ‘I did this.’ It’s a moment of feeling really accomplished and proud.”

“Ballet is very structural and strict. There’s a right and a wrong. Jazz is very stylistic. Tap is all about the shoes. Lyrical is portraying emotions and story. Modern was built on the ideas of many choreographers including Martha Graham and dancer Isadora Duncan. With contemporary, in theory, there are no rules — there’s freedom of movement and expression,” says Esposito.

“With contemporary and hip-hop you can really go outside the box. People can just come up with their own steps,” adds Gee, a sophomore creative writing major.

The group recently performed a piece about racism and police brutality at Family Weekend in October. To tell each story, Esposito and Gee incorporate simple, expressive gestures and movements into the steps and routine — in this case, mimicking handcuffs. “I want our audience to feel empathy and sympathy for those around them,” adds Williams.

To choreograph a routine takes a lot of thought and effort. Esposito still uses the process she learned in high school, attending Morris County School of Technology as a dance major. “Pick an issue. Work on steps. Work up a choreography proposal including the number of dancers, the songs, the costumes, the lighting. Come in with the plan and a song — this is ‘proof of life’ to show that you’re actually working on the piece. Then it’s time to rehearse. The more you rehearse, the more you gain muscle memory.”

In rehearsal, the choreographers teach the routine, tightening and “cleaning” the piece as they go.

FDP members show up ready to practice. It’s a lighthearted atmosphere, full of chatter and laughter, but also completely dedicated to dance. “They come to rehearsal because they want to be there. They have positive attitudes and they take our criticism. It’s so refreshing to see how they interact with each other and ask for help,” says Gee.

Both Esposito and Gee set high expectations, but emphasize it’s not about meeting a particular set of standards — rather, they want members who are committed to dancing and to FDP. And that commitment includes self-improvement, for everyone, including the founders.

“A lot of people think about the flexibility and technicality of dance. I don’t have the best technique. My point isn’t perfect and I’m not very flexible. I can’t hold my leg up to my face, or do a split whenever I want,” says Gee. “My dancing is performance-based and I perform really well. That puts me on the level of people who are more flexible.”

Appreciating how each individual body moves and twists is an important part of dance. “You’re not going to look like every other dancer or person. The way you do it is right for you,” Gee says.

“As a kid, I wasn’t very graceful. But hip-hop showed me that you don’t have to be graceful. There’s just so much power behind it. It’s very expressive,” says Williams.

This semester, FDP hosted a “master class” led by Anthony Zas, an actor and dancer who toured with the Broadway hit show “Newsies.” A former classmate of Esposito’s, he reached out to her and they set up a rehearsal surprise.

“If I mess up on something, it encourages me to keep practicing more. It’s a good way to keep me working hard,” says Berdecia. “Zas was so funny and pumped up and shared his energy. It was so much fun.”

The group provides an artistic outlet for students, and a healthy one at that: “Dancing is such a good stress reliever for college students. The moment you step into the studio, you can just let all that go, and focus on yourself and your body and how you’re feeling and moving,” Esposito says.

“When you have strong feelings, and feel upset or angry, it’s good to take it out on something productive. Dance can be that,” says Gee.

Through FDP, Williams has found her endurance, Berdecia his confidence, Gee her potential, Esposito her capability. “Dance has helped me embrace my strengths. And embrace myself,” says Gee. 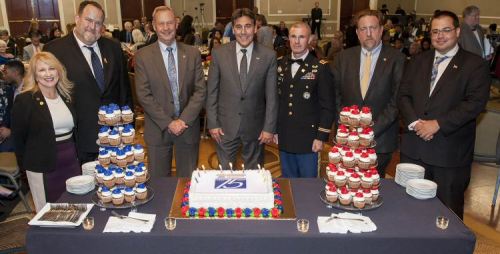 On the Clash of News, Politics and Justice with Journalist Jeffrey Toobin

“This has been the most tumultuous debut of a new administration,” said Toobin at the beginning of the discussion. “This week, in particular, has been really surreal. It’s just been this whirlwind of news,” he said, referencing the terror attack in New York City and the indictments announced against President Donald Trump’s former presidential campaign chairman Paul Manafort.

“I don’t think there’s anything that [special counsel Robert] Mueller could find that would lead House Republicans to impeach Trump,” said Toobin. But, he contends, if the president attempts to fire Mueller — a decision that would have to be carried out by the Department of Justice — that may spark action.

He answered audience questions on modern warfare and terrorism, health care and abortion rights, indictments and partisanship, athletes taking a knee, and justice and the Supreme Court.

“Why have politics become so polarized might be the question of our time,” said Toobin. “I don’t pretend to know the answer.” Instead, he offered two contributing factors: partisan gerrymandering and the evolution of media.

“Gerrymandering [the determining of electoral districts to create political advantage], locks a party in power. People don’t have to fear the opposing party or cooperate with the opposing party. It also contributes to the election of politicians who don’t want to compromise.”

At the same time, the public, the media and the politicians can no longer agree on what constitutes fact. At one point he joked, “Does anybody remember what a newspaper is?” Cable news and social media, especially Facebook, said Toobin, reinforce narratives. “Most people get their news on Facebook,” which allows the social media platform to curate and determine what shows up in an individual’s news feed. If a user clicks on conservative content, more conservative content will show up, and vice versa. “There’s no law that says you only have to click on Facebook. The Internet is the greatest information source the world has ever seen, with more access to diverse news sources. Use the Internet as a resource, in an exploratory way.”

Later in the evening, Toobin spoke at the New Jersey Performing Arts Center in Newark, N.J., as part of FDU’s New Jersey Speakers Series. The Speakers Series brings world leaders, acclaimed authors and other fascinating personalities to NJPAC for seven Thursday evening presentations, each of which is followed by an audience Q&A with the featured speakers.

The chief legal analyst for CNN and a staff writer for The New Yorker, Toobin also authored The Run of His Life: The People vs. O. J. Simpson, the basis for the acclaimed FX miniseries. His latest book is American Heiress: The Wild Saga of the Kidnapping, Crimes and Trial of Patty Hearst.