As the semester draws to a close, I hope you will enjoy our special issue this month on what New Jersey’s colleges and universities are doing to enhance opportunities for students interested in careers in Science, Technology, Engineering and Math (STEM).

STEM jobs are the jobs of the future, with more than 200,000 STEM-related positions needing to be filled by 2025. This represents both a challenge and an opportunity. New Jersey has long been known as a highly educated State, with an attainment rate recently estimated to be at 50.1 percent, meaning that slightly more than half of our working-age adults have some level of education after high school. That’s not bad, compared with the national attainment rate of 45.3 percent, but it’s not good enough.

Our State must do much more to keep pace with dramatic demographic changes in a rapidly changing economy. While the national goal for attainment is 60 percent by 2025, the demand for skilled jobs is expected to be higher in New Jersey. That is why the State has established an attainment goal of 65 percent by 2025, a goal which is both aspirational and attainable.

I recently signed a Joint Policy Resolution on a Statewide Postsecondary Degree Attainment Goal of 65 percent with Aaron Fichtner, the Acting Commissioner of the Department of Labor and Workforce Development and John McGoldrick, Chair of the Governor’s Higher Education Council. The resolution was endorsed by the State Employment Training Commission, by Governor Christie and Lt. Governor Guadagno, and the New Jersey Council of County Colleges.

If we are to achieve this goal, we must involve everyone, including women and underserved minorities, who have traditionally not been well represented in STEM fields. That is why I am pleased to see so many pictures in our blog of people from diverse backgrounds involved in STEM.

I know that you are busy planning for graduation ceremonies in a few weeks, but before I close, I want to acknowledge three important developments: 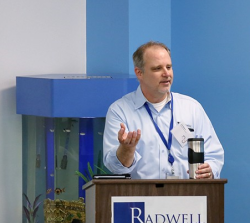 • Thanks to John Radwell, vice president of Radwell International, for hosting an informative meeting of the STEM Pathways Network last month. John was an extremely gracious host, who took time to show us how robots can find and deliver hundreds of computer parts in his new warehouse in Willingboro in only a few minutes. Thanks are also in order to the participants of an interesting panel discussion which included Acting Labor Commissioner Fichtner, Robert C. Regensburger, Project Specialist Principal of Lockheed Martin; Judy Savage, Executive Director, NJ Council of County Vocational-Technical Schools; Donald H. Sebastian, President and CEO of the New Jersey Innovation Institute; and Sivaraman Anbarasan, Executive Director/CEO of the NJ Community College Consortium for Workforce & Economic Development. Kim Case, Executive Director, Research & Development Council of New Jersey, served as moderator.

• A special thanks to Rowan University President Ali Houshmand and his Chief of Staff Joanne Connor for inviting me to speak at the ACE Women’s Network meeting on Rowan’s Glassboro campus. If we are to meet our goals – and if women are to have true equality in the workplace – it starts with the commitment from the top. President Houshmand has made extraordinary efforts to support the advancement of women on his campus, and I was delighted to meet so many talented women at the event. I was honored to receive an achievement award.

• Nannette Wright, chair of the Educational Opportunity Fund and a leader at Lockheed Martin, has agreed to chair the Equity Committee of the STEM Pathways Network, to ensure that people from every walk of life have access to careers in STEM. Nannette is proof that, if you want something important done well, ask a busy person to do it. I deeply appreciate that Nannette has added this important task to her already full plate.

In closing, I wish you the best of luck during finals week. As you plan your graduation ceremonies, take time to celebrate your achievements, and take some time to reflect on your success. You’ve earned it!